We have an old barn. One that I fell in love with despite its crookedness. There is just something about old barn wood. It was built in the 1850s.

We started the spring of 2016 with over 30 chickens and are down to 23. We pasture raise our chickens from the sun up to the sundown. Ok, lately they have been leaving the coop around 9 or 10 a.m. This whole running a coupon blog thing 😉

The difference between pasture raising and free-ranging is this. When you pasture raise they go wherever they please. They aren’t kept in by a fence of any sort. You can free range birds meaning they have enough space to move about and get fresh air, but they are still kept in by some type of fencing.

There are of course many risks to pasture raising your birds. I suggest if you do pasture raise or free range to check out the tips on keeping your flock safe here.

Cuts down considerably on feed cost.

Helps Keep Down on Bugs Around the Yard

Helps Clean Up Under the Fruit Trees

We lost one to a car on the road. ( not the brightest thing) and one to a fox inside the coop during the day. They were both roosters and they were both meat birds. This was when I stopped being naive to the fact that you pasture raise chickens you lose some, until the night we saw a fat raccoon in the coop.

We let our birds have free range when we moved to our farmhouse because we didn’t have a spacious fenced area for them. We thought out here in the country why not let the birds roam free. I choose this because it saves us alot of feed, time cleaning the coop, and the eggs and meat taste amazing.

Time to Bring out The Gun

It’s Friday before Halloween. Time to carve pumpkins. This is the first time we are celebrating Halloween in our new farmhouse.

Music is going and the sun is setting earlier than we realized. Eric goes out to close the chickens up. As soon as he opens the door he hears quite a ruckus. He immediately comes back in and grabs his gun.

The girls and I didn’t even realize he did this because my oldest daughter was having a meltdown because the face she drew on her pumpkin was not quite right.

We hear the shot.

I panic. I immediately know something was after the chickens. Eric tells us that we are missing three chickens. Two brown ones, smokey my oldest daughter’s favorite and our silky bantam- Noodle.

Silkies tend to be loners and she is the only one of her kind. Every night she roosts outside of the chicken coop up on her own barn beam.

The raccoon was shot just under her barn beam in the space between the upstairs floor in the barn and the ceiling.

All the same color feathers of the chickens who are missing.

Noodle is a goner. How could she not be? She doesn’t even go into the coop. The rest of the birds were trying to escape the coop they were pushing the screen so far it busted half off the corner.

I prepare myself to tell the girls we lost some chickens.

I know this happens but the first time telling the girls it was because they got eaten is a bit harder than getting hit by a car.

Yet something is off.

Raccoons are known to just eat the heads. They need a nutrient in the chicken’s brain. They also tend to leave the bodies.

I couldn’t help but think- ” Should we not free range our birds anymore?”

Everyone was right- you free range you will lose your chickens.

I couldn’t shake the feeling that something wasn’t right.

I went to the front porch just looking out and to my right on one of our fence rails, I see two chickens.

Then we find another one hiding in the farm stand.

We see MORE white feathers. A trail that follows to the field next to us. 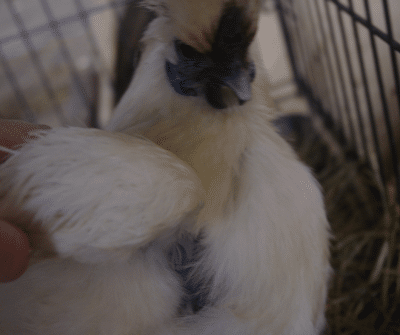 But then we see another huge white pile of feathers.

And under a little decorative white fence is our little noodle. 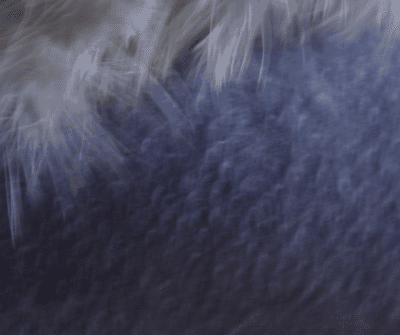 Check out this girl wound. She lost a major section of feathers.

Why Our Chickens Survived

But this chicken survived because she was pasture raised. She was able to run from the coop and escape.

She had a raccoon most likely bite her and she escaped.

The girls were very shaken up over this. The four that were attacked didn’t go into the coop for a good three days.

We had to pick them up and put them in.

I loved that the next night we couldn’t find one of the chickens. She decided to go on top of my husband’s work van.

She took her chances. I’m just thankful an owl didn’t take her out!

In conclusion, I realized I love free ranging our birds. Sure they have a risk of predators but we are allowing them to live out their natural instincts. Plus if they were in the chicken coop and unable to escape we would have lost many birds.

Pasture raising your birds also cut down on the cost of feed and gives your eggs the best taste EVER! Even if you do not want your birds roaming all over your yard raising your own chickens is a true joy.

Do you Pasture Raise Your Birds?

Some people raise a goose with their flock and claim they are good guardians. Having had a few run ins with geese, I would think they might make it difficult to work with the flock or gather eggs.

I could see that. I personally am not a fan of geese. We have some that come back every year to our pond and that's good for me. We do have five ducks mixed in with the chickens now this year. Our dog helps keep an eye on things as well.